It's all about the superhero's!

Last week my little man turned 5!
EEEK! Where did the time go???
Over the last few years Wiyot has developed various favourite characters, first one being Wall.E, most of them being some form of superhero: Buzz Lightyear, Spiderman, Iron Man, etc... Last year the hero of the moment was Disney/Pixar's Mr Incredible.
In June, 2010 he received an invitation to a Superhero birthday party, it was no surprise who he wanted to go as! However, it was a surprise that there were very few Mr Inc costumes available to buy. Lucky for me/Wiyot my new sewing hobby had just begun.
So we "Dash"ed ;) off to the local(ish) fabric store and purchased some suitable material... thats right red and black lycra! Oh yeah!
First step was to draft a pattern using some cheap muslin fabric. I did this by following the directions in The Little Black Dress... Wiyot wasn't too impressed by this process! Hence there are no photos!
Once the pattern was finished, the fun truly began!
As soon as the fittings were in the red fabric, Wiyot was much more excited and didn't want to take off the pieces.
Please excuse the mess in these pics, this is what happens when you have only a week to make two superhero costumes... from scratch!
I also knocked up a Jack-Jack costume for Shoshone, throughout the night! :/ Unfortunately, didn't really get any good shots of that one, but it actually turned out better than this one... Probably because I had gained experience working with the fabric.
Well, the costume was a big hit. People at the party even asked me were I bought it from :D
Wiyot wore it pretty much every day for the next few months and its still going strong... bit tight now though :/
And finally, what other card could he have had other than an Incredible one (for his 4th birthday)... 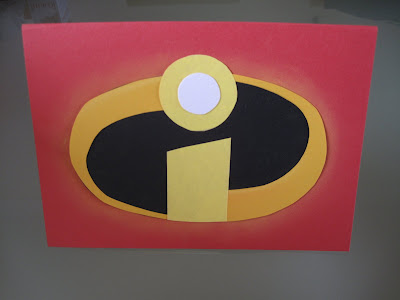 As always, a last minute job... I feel like a terrible mom admitting this, but I actually got up early and made it on the morning of his birthday (Sorry Wiyot!)
The latest craze is Spiderman...
He's already put in an order for a new suit...
Any ideas how to do the web patterns???
Posted by littlefoot at 00:37