As in it took at least that long to complete. 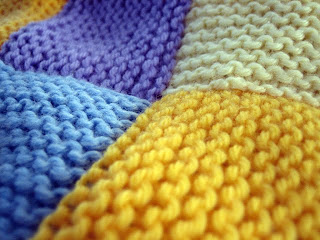 I think it was my second knitting project. I started it while pregnant with Wiyot and completed it just in time for the birth of Shoshone :-S

It is made up of small garter stitch squares, which are then sewn together... it was the sewing that was the problem!

All but a few squares were knitted during my first pregnancy. I used to knit the squares on the bus on my way in to work...


And then began the sewing...

It took so long to join each square, probably because I didn't have much experience, so it took a lot of concentration, only to have to unpick at the end as the edges weren't coming together level. ARRRGH!

I'm still don't enjoy the joining process and usually have all the knitted components finished for some time before I get round to the sewing. You'd think it would be exciting as you finally get to see your work coming together to form a wearable garment.

Surprisingly, after giving birth to Wiyot I didn't get much time for knitting, let alone the sewing part. As he got older there seemed no point as he wouldn't need the blanket anyway!

When I found I was pregnant with Shoshone I realised I'd better get it finished! We aren't planning any more babies, so if she didn't get to use it all the hard work would be for nothing. 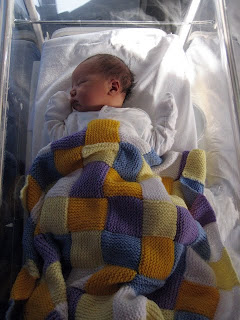 I didn't finish it all in one go. I kept coming back to it, sewing a few more squares here and there. My sewing skills must have improved as it took much less concentration and I could do it right first time round. After finishing it I decided it wasn't big enough and ended up adding a few rows at the bottom and sides... luckily I still had some left over yarn.

Well, it took ages but I love it! I took it to the hospital for when we bought Shoshone home and it's still the first blanket I choose when we're going out :-)

BTW, if anyone is wondering, the pattern is from Baby Knits for Beginners

by Debbie Bliss
Posted by littlefoot at 16:58