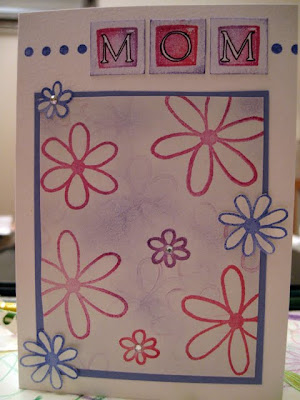 For yesterday that is...
It's been so long since I did any paper crafting, like Christmas 2008! Oh actually just remembered I made a kind of scrapbook/birthday card for my Granddad in August 2009... But, it seems like so long ago!!! Since blogging some of my previous card attempts, it made me want to have another go. So I decided to have a go at making a card for Mom :-)
From a cluttered up and trying to keep the house tidy point of view, I feel I have too much craft stuff... yet when I go to make something I never have enough and struggle, trying to find new ways of using the same bits... I have loads of lovely papers, but hate to cut into them for card making, I can barely stand doing it for scrap booking... just want to keep them whole...
Anyway, the flower stamps I used were in the first set I bought. I also used them in the card I made for my nan here. The large flower stamp is also from the same set. I've also used them in scrapbook pages, that I'll get round to blogging about at some point! Come to think of it the diamonte things were in the set with the stamps too... It was a qvc today's special value from a few years ago... had a lot of good stuff in there :-)
It's such a simple design, but it took me sooooooo long to do!
I have no idea why, it was one of those days when the creative juices just weren't quite flowing in the right direction. I did the flowery paper quite quick and the letter tiles, but then took me forever to lay it out and come up with a way to finish it of. I toyed with the idea of leaves and flower round the border, adding butterflies and whatever else I can't remember now.
I like it, but still not happy with it... just kind of frustrated that whatever it was that I was trying to do, just wasn't quite meshing
This post is a bit jumbled too... Still channelling the card vibe I guess?
Posted by littlefoot at 00:37