Hey guys, me again... back for another foray in the world of blogging!

Thought I'd share a few leaving cards I've made for people over the years. They were made for colleagues who were leaving, based on the Disney Characters on their name badges. :) 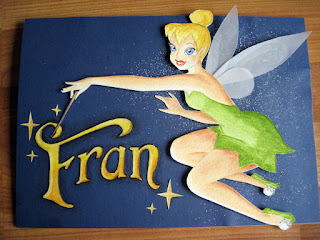 Fran's Tink card was the one that started it off. All because another colleague roped me in to do it at the last minute. All hand made, I designed the lettering based on the Never fairies lettering and did a watercolour of Tink based on a few pics I found of her online. I wanted her wings to be see through, so I used vellum paper and drew on the wing pattern. 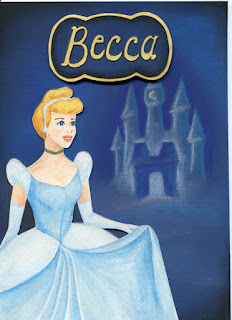 Not long after Fran, Becca decided it was time to depart. The lettering is based on the Cinderella lettering on the DVD cover. I did a rough sketch of the castle for the background and did a watercolour of Cinderella based on pictures of her in the movie when she gets her makeover and when she first enters the castle. 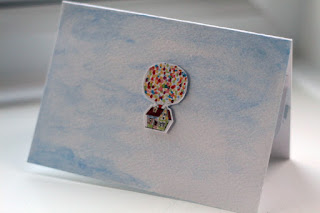 My most recent card was made for Sarah, bit different from the others. I did add some writing to the front and inside after the pictures were taken. If I remember correctly, on the front of the card I put something like "... time for a new adventure!" based on Elle's note to Carl in Up. 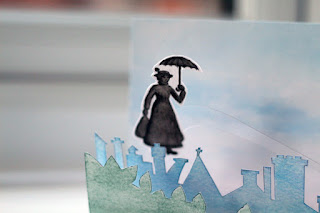 The inside of the card was pop up. The trees and skyline were based on the skyline around the Imagination Disney Stores. It's hard to tell from the picture, but as you open the card, Mary Poppins rises up from behind the rooftops... flying off... leaving the Disney Store. :’(
"So long Mary Poppins" was written in front of the trees, obviously based on Bert at the end of the movie.